Earlier in the year I outlined how I wanted to curb my spending, specifically when it comes to food, electricity, and transportation costs.  The plan for how to reduce those expenses and why can be found here and you can see Q1 results here.  Today I will take a look at how things are going half way into the year.  As with most changes in behavior I have had success in some areas and challenges in others, I think this is normal and when setting goals it’s helpful to measure progress by the slow attainment towards a goal vs. the absolute achievement of the goal; things take time…

The first half of 2013 has been an expensive year to say the least.  I’ve made great progress on two-thirds of the areas in which I wanted to reduce spending, but there are several other areas where spending continued its creep.  I’m not trying to make excuses, but a lot of this was just part of settling into post-expat life.  When I went overseas I sold most of my belongings and had nothing in the way of furnishings and I do mean nothing.  The past six months has seen progress in reducing the recurring expenses, but that has been offset by the increased spending in one time purchases like furniture, not replacement furniture mind you, but first-time  purchases.  The remainder of the year should see a gradual reduction of these expenses because I know I now have most of what I need.

I’m going to start with the least successful of the three expenses I was tackling, food: 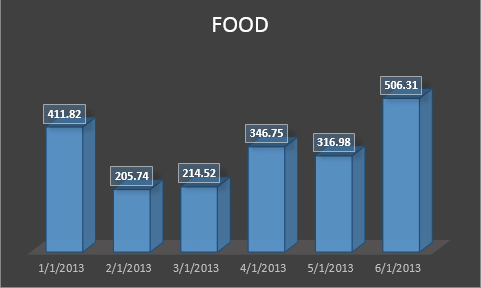 I’m really not sure what happened here; honestly I don’t.  Improvements were made in Feb. and March and for the entire second quarter things got out of hand.  The best I have to offer is this; Feb. and March were cooler months and I enjoyed staying in and cooking.  As the temps began to increase I was becoming more social and eating out more, June was full of house buying activities and eating at home just wasn’t desirable or convenient.  Poor excuses I know, but it’s all I got. 😦

I’m not one to think I have to achieve perfection in every goal I undertake.  Although I failed miserably in reducing my food expenses for the second quarter seeing these numbers has motivated me to dig and get serious about this area of spending.

Selling the truck made a big difference in my fuel spending as can be seen in the next graph: 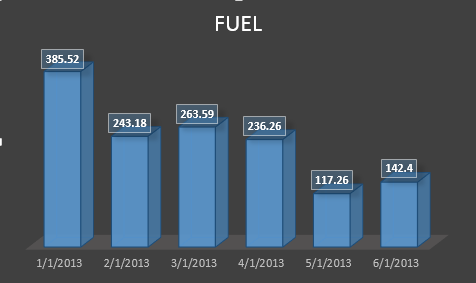 February, March, and April were months I was really trying to cut back on unnecessary driving and my fuel expenditures dropped and stayed fairly consistent for those months.  I sold the truck in April which saw a slight reduction in fuel expenses, but nothing like May and June.  The interesting thing about the last two months is that I have actually logged more miles and spent less money!  What a difference 42 mpg makes versus 16 mpg.

It is likely that going forward my fuel expenses will climb some due to the ongoing need for four-wheel transportation.  The number of trips to Lowes and other places for tools and materials is ridiculous.  I’ve had to borrow a vehicle from friends twice last week and the need for a way of transporting things is only going to increase from here on.  Maybe I sold the truck too soon? Doubtful.  It would be convenient, but I think I can accomplish the same thing with something that is more fuel-efficient.

Now the best of the three, the electric bill.  I’ve been very happy with how it has continued on a downward trend for each month of this year except June.  I used the dryer a little more out of laziness and also turned the A/C on a couple of times on hot days. 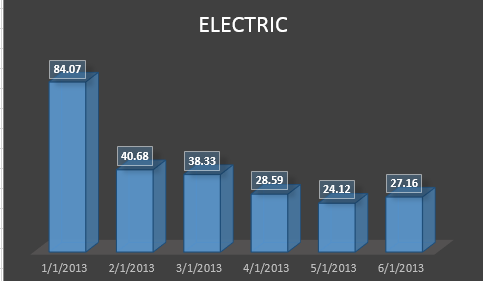 July will be the last month for the electric bill at the apartment then it will be switched over to the house.  Not sure what my utility bills will run there but I’m already looking at ways to improve the energy efficiency of the home from the windows and doors I’m replacing to the new insulation that will go in the attic.  The house actually sets very well from and energy-efficient stand point.  The front faces the east and the large trees in the front as well as the back offer several hours of shade throughout the day.

Making progress in two out of three areas isn’t bad; right?  I still have plenty of room for improvement but I think I’m making steady progress.

The first half of this year has actually been fairly expensive due to several expenses that will not be recurring in the future.  I’m close to being done with purchasing furniture and several other fees that occurred in the first part of the year will not be seen until next year.  I’m thinking the last half of the year will be much less expensive.  Total spending thus far has been 17294.  Way too much…

There is still much room for improvement, but tracking the progress allows me to see where I’m succeeding and where I need to put forth more effort.  I’m looking forward to seeing how my expenses change with owning the house.  Should make for an interesting end of year report.

How has the first half the year been for you?  Meeting your goals or finding it challenging?