You and I are a probably different in many ways.  We could list all the differences we have, but the same could be said for similarities.  Since the root of all understanding of difference comes from sharing similarities first, let’s start there.  As a child I bet we shared one very common experience; parents who were always telling us “no”.Yes, yes, I agree.  It really was a travesty.  Within our first year we probably heard this sound, but weren’t quite sure what it meant.  By year two it was a sound that interfered with an otherwise wonderful time of exploring the world around us and we soon learned that this sound, “no”, really had a negative connotation to it.  A restraint on our desires that would follow us all the way into the latter part of our second decade of life.  “This is bullshit!” our young minds protested, albeit not in such language, that was reserved for later and likely had an additional expletive inserted right before the last one to truly reflect the outrage we felt at being denied our wants.  I mean seriously, who did these larger beings think they were?  Coming between me and my desires! 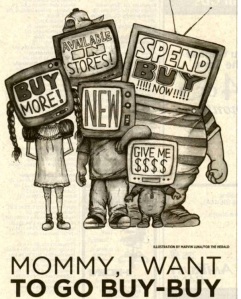 Me and some friends circa 1980

Are you serious?!  These same beings likely had a T.V. on that was constantly dropping (not) so subtle hints of all the things we didn’t  have and how it was the absence of those things that made us unhappy.  “Yes!, I really do need the entire G.I. Joe collection to be happy.  It doesn’t matter that I have a room full of G.I. Joes, I don’t have this one!” I would plead. “Can’t you just play with the ones you have?” came the reply, totally missing the main issue; that this one desire, once fulfilled would complete me and set the universe in order once again.  The other alternative that often happened was that I would be denied my desire and proceed to have a Class IV meltdown that only a child of five or six can produce after being denied his/her desire for a toy!

After being subjected to all this “NO” nonsense for about two decades we enter another phase, a freedom of sorts we have not known before, there is no longer anyone around to tell us no and we set about fulfilling every desire that enters our minds.  Now some of you may have had more restraint than I did during this phase and if so I tip my hat to you, but it would take many years before I learned anything of restraint.

The desires now are much more expensive and recurring.  Houses, vehicles, clothing, “services”, things like gym memberships, cable, cell phones.  Things that are luxuries masquerading as needs.  Since there are no grown-ups standing around denying us and telling us to play with what we have, we fall prey to the Siren’s song of advertisers telling us to “upgrade” and things will once again be better.  Liars they are!

So, what if we learned another way?  Could we increase our tranquility by occasionally denying ourselves simple pleasures?  If you believe hedonistic adaptation is a real phenomena then it won’t be much of a stretch to believe that denying yourself occasionally might increase your enjoyment of everyday life.

I’m going to share a couple of examples in my own life.  They’re very small changes that have helped me live more intentionally and not take things for granted.

In December I focused on cutting back my food expenses after seeing last months food costs, and realizing it was a little on the ridiculous side.  I rarely buy meat these days.  Although I don’t consider myself a vegetarian, I would say that about 85-90% of my eating is plant-based.  At the beginning of the month I bought three pounds of ground beef, one pound for chili I planned on cooking around the middle of the month and the other two pounds for a meatloaf recipe I wanted to try.  Now for someone who eating meat is a daily indulgence, hedonistic adaptation has already occurred and this is nothing special.  For me, this was a delight!  It was the only meat I bought for the month and because my palate hasn’t been dulled from the constant eating of meat, each meal that included it was a special event that had much more enjoyment.

Coffee is another of my favorite indulgences.  A friend of mine I met in Saudi taught me the art of making a perfect brew and I’ve carried his lessons with me to this day.   This month I haven’t had any coffee, I substituted chai instead, but I’m eagerly waiting to break out the French press, grinder, and opening up a bag of whole beans and enjoying the aroma that escapes when you first open it.   Simple pleasures multiplied by subtraction.  Is there a better formulae for living? 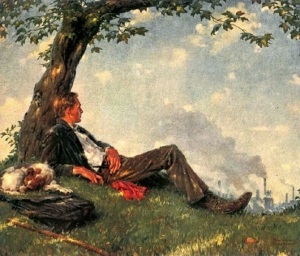 The Stoic of today summed up nicely in Norman Rockwell’s “The Philosopher.”

This isn’t about saving money, although the financial benefits are obvious.  This is about living well by changing habits, by finding the value of saying “no” to ourselves once again and finding the joy of living simply.  I think when people try to refute the idea of simple living they miss the point.  Those who have chosen to live simply have chosen to simplify their material needs and wants, but to imply they live simple inner lives is a mistake and I would argue that the more you simplify your material world the stronger and more profound your inner world becomes.

Care to share how you combat hedonistic adaptation? I would love hearing about new techniques.

4 thoughts on “The Benefits of Occasionally Denying Your Wants”