I have a confession to make.  Over the past year and half I have been a bit confused in the direction I wanted my life to take.  Having achieved greater financial freedom after paying off my debts and then securing housing by buying a foreclosure and fixing it up myself, I found that there were numerous opportunities before me.One of the things they don’t tell you when you achieve greater financial freedom and change your consumer oriented ways is that you better have something to take its place, because if you don’t you might slip in to a void that has been left behind.  It is within this void that I have spent over a year and half attempting to create a new life for myself radically different from my old life.  Even though the stoic investor started off as a blog about investing, it soon morphed into The Stoic, who is attempting to live his philosophy, not just think and read about it.  Although this may have caused some readers to lose interest, I think it is a testament to how are economic lives should evolve.  All the banter about investing, personal finance, savings, spending etc. is merely to allow us to use our personal economy to the greater ends of what we believe it means to live well.

“If a man does not keep pace with his companions, perhaps it is because he hears a different drummer. Let him step to the music which he hears, however measured and far away.” Thoreau

For most of my life I’ve felt like I heard a different drummer, but could not identify where he was and so fell in to a trap of living not entirely authentic to myself.  I once believed that success was to be found with a high income job and all that it could provide, but soon learned that it wasn’t what I really wanted.  It didn’t have the soothing tone of the “different drummer”, but I had to at least achieve some modicum of that kind of success before I could really pursue my own version of success.

I believe there is too little discourse on what it means to live well.  The modern version of living well is dominated by consumption and economic gain.  In fact I believe the entirety of our existence is believed by many to have only one measure of success and that is how well off we are financially.  In today’s climate of never ending growth and capitalism-for-profit for the entire planet, we forget that it hasn’t always been so.  Higher income may allow one to achieve a higher standard of living, even though I would argue that it doesn’t necessarily increase the quality of the life being lived.  We are encouraged to follow our passions, but to find a good paying job with benefits.  We are told relationships are important, but cautioned that sometimes we need to make sacrifices to advance our careers.  And so it is, the stage of our lives becomes dominated by the economic concerns where the other real treasures of life are merely the backdrop and props.  I would argue that we have it reversed and it is our personal economy that should be the backdrop with the other most important of characters taking the main stage and dominating it.

“There are nowadays professors of philosophy, but not philosophers.  Yet it is admirable to profess because it was once admirable to live.  To be a philosopher is not merely to have subtle thoughts, nor even to found a school, but so to love wisdom as to live according to its dictates, a life of simplicity, independence, and magnanimity, and trust.  It is to solve some of the problems of life, not only theoretically, but practically.” Thoreau

When I graduated with my undergrad degree in philosophy I remember my dad asking me, “What are you going to do with that?” It was an honest question, as philosophy degrees routinely make it on the top ten lists of worthless degrees.  However, does it mean that any thing society as a whole does not find valuable has none?  Perhaps it is the opposite, maybe we should question, at least occasionally if what society values is really valuable.  I would rather swing a hammer and live my own philosophy than do anything else and live someone else’s by default.

Today I hear that distant drummer much more closely than ever before and I’m determined to live my life as authentically as possible.  It may drift a little from the norm, but it will be one I hope I can look back on and be proud to call my own. 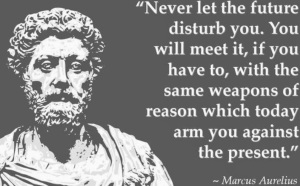 2015 will be the beginning of what I guess could be called a five year plan.  This year will mark the 40th birthday of The Stoic and by the time I reach 45 I would like to be financially independent.   This year will be putting into play the things necessary to achieve my FI goal.  Here are some things I will be focusing on this year and the years to come:

As you can see, there are lot of reason I think this year will be a banner one for The Stoic.  I’ll share more details in future posts and hope you come along for the journey.