For most of my life, roughly 38 years of it to be exact, I’ve never been what you would call “mechanically inclined”.  I wasn’t “handy” with anything.  When things broke I dreaded having to call someone to fix it.  I stayed away from any activity that required me to use my hands.  It’s not like I didn’t have amble opportunity when I was younger to learn these things. My dad is the epitome of “handy”.  Seriously, the man can fix and build just about anything.  But even though he had the desire to pass those skills on to me, I never had the interest to take the time to learn them.  I was too busy doing other things and couldn’t see the value of what those skills could mean to me.  You see, the cost of anything is the amount of life it takes to acquire it.  That’s pretty much verbatim of what Thoreau said in his classic, Walden.  You can purchase things with the money you have earned from the exchange of your time for a set amount of income or you can take that same time and learn how to repair/build things yourself, giving you the choice of what is the best course of action in a given situation.  Sometimes it may be hiring the work out or it may be in your better interest to do it yourself.  Having the choice is imperative to exercising a greater degree of freedom.

But back to my story.  I didn’t really start becoming interested in repairing and building things until I bought the house I currently live in and set about doing the bulk of the rehab work myself.  Back then I did these things out of necessity, because I knew that if I hired everything out I wouldn’t make anything from it.  So, I bought a bunch of tools and set about learning dozens of new skills.  Everything from tile work, plumbing, flooring, drywall, hanging doors etc.  and I found that I was beginning to enjoy doing these things.  It was fun to take something that looked horrible and turn it into something pleasing, almost beautiful.  The more I did things the more my skills set grew and I was soon able to look at problems and have fairly good idea of what needed to be done.  There was a certain satisfaction that came with being able to fix or build something myself.  Don’t get me wrong, learning this stuff comes with a lot of frustration and occasional bouts of outright anger when you screw things up and have to tear it out, buy new material and start over.  It’s a learning process and if you stick with it you begin to enjoy the satisfaction that comes later when you progress from crawling to walking and the actual fruit of your labor enters the realm of the tangible.

Over the last year and half I’ve enjoyed building things so much that I started working for myself building things that people would pay me good money to do!  And I haven’t stopped there.  I eventually want to progress to s point I can build my own cabin in a few years, but I have a lot more walking to do before I can run.

I mentioned in my post on 2015 being the year of The Stoic that I wanted to start building some furniture.  I think it would be cool to build useable furniture instead of going and buying things.  I’m not in need of anything, I just want to create!  I just enjoy the act of building stuff!  It’s fun.  It’s my new hobby, a form of entertainment.  With unusually mild temps the last couple of days, I decided to spend my evenings building a bookcase from scrap lumber I had laying around.  I had seen a picture of a corner bookcase and thought it would be neat to build one.  I also thought it would be really cool to build something out of lumber that would normally be wasted.  What follows is the process and what the end product ended up looking like.  Be easy on your judgment, I’m certainly not a master woodworker, yet.

After looking at few different pictures online and getting an idea of how it would come together I jotted a few things down:

Hard to believe I’m not an engineer with this level of details in my plans. 🙂

Once I had an idea of what it was going to look like I gathered the material needed for the project.  I’ve never built any piece of furniture before and I didn’t want to spend money on nice material when I knew that this was for practice, that I would make mistakes and it likely wouldn’t turn out well.  I have several pieces of cedar fence boards that I couldn’t use on a fence installation because of various defects, but decided I would keep them and build some planter boxes that I want to mount under my windows this spring.  I could probably get by with using them for the bookcase as well.  It was certainly worth a try. 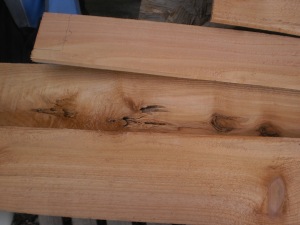 In the pictures above you can see the bad areas of the wood. I was able to utilize most of the wood by simply cutting the bad spots out. This was also very satisfying; I was building something out of wood that would normally be discarded.

The Finished Product (It actually looks like a bookcase! 🙂

I was actually happy with how it turned out.  I didn’t prep the wood at all.  No sanding or anything.  It’s simply rough cut cedar, but overall it turned out well.  Actually, it tuned out better than I thought it would.   What do you think? 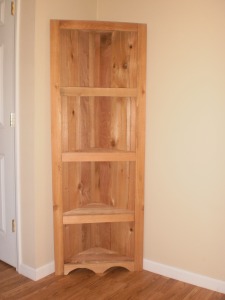 I think I’m going to keep this in the living room where it currently is.  It fits nicely in this little corner and actually looks nice.  An added benefit?  The smell of cedar is amazing! 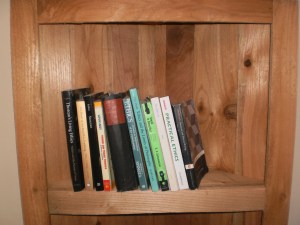 A close up of the shelving and trim as well as a selection from The Stoic’s library.

I think my next project will be one or two end tables.  I’ll likely use cedar material again as I have plenty of it and would love to see it put to good use.  These little projects are simply to allow me to develop my woodworking skills.  As I get better I may start to purchase better materials, but for now I’m content with using what is available and practicing the art of upcycling.

12 thoughts on “The Joy Of Building Things”