Sunday night we received almost a foot of snow, around 10″ depending on whose numbers you use.  Now for some of those living in the northern states or even outside the United States who experience colder temps with more snow, this is a joke, but here in the Bluegrass State it’s cause for a state of emergency, literally.Following close behind the snow is colder temps, which means the white stuff is going to hang around for a while.  How cold?  Single digit highs and lows in the negative double digits.  Again, laughable and business as usual for those who are familiar to such weather, but bordering on unbearable for some of my fellow citizens.  These are the times people make runs on the grocery stores and stock up on bread and milk.  I’ve always been curious as to why it is these two items that people stock up on.  If I had to shelter in place, I would prefer a little more variety.

There was a time that this type of weather would’ve awakened a sense of dread in me.  I would have dreaded getting out on the roads, shoveling the sidewalks, scraping my windshield.  When I was working as a paramedic, I knew that days like this would have me spending much of it outdoors working vehicle accidents, most being minor fender-benders, but some being serious and requiring the passenger(s) to be cut out of their vehicle.  These were the nights we kept a medic in the ambulance on-scene for the sole purpose of having one person who actually had hands that weren’t bordering on frostbite and could actually start an I.V. or intubate a patient if needed.

These days there is no dread about snow or cold.  Although I have work on the books, I’ve logged about two hours this month, choosing to stay home and enjoy what the season has to offer.  There’s no need for me to run out to the store.  There is plenty of food in the pantry and even more chili, soups, and stews in the freezer from all the slow cooker cooking I’ve done this winter.  I’m not even worried if the power goes out.  I’ve bottled some water and have enough camping gear that I could sleep quite warm in my down sleeping bag.   There is plenty of scrap wood from my wood working projects that if things got really bad, I could start a fire to give me some warmth and use for cooking.  Not to mention that I could ask my neighbors for help, go to friends/family, or get a hotel room  (OK, for me that last option is almost laughable).  There is no worry or anxiety, there is only peace.

A few weeks ago I built a couple of bird feeders and a bird house.  At the time I was just looking for something simple to build and was hoping to create an attractive environment for the birds so that I could enjoy their music over the course of the coming seasons.  I have a large area of woods right behind my backyard so the environment is already favorable, I was only hoping to add a little more appeal.  The birds found my feeders and I’ve been privy to an unbridled display of only a small portion of Natures immense beauty.  Cardinals, blue jays, yellow-bellied woodpeckers, red bellied sap suckers, doves, robins and several others I’ve yet to identify all giving me a glimpse of their lives right outside my window as I write these words. 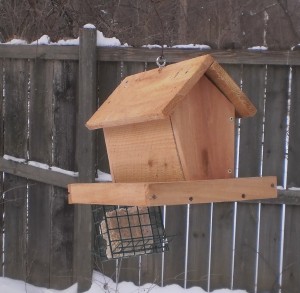 Regular bird feeder I built with a suet feeder attached.

Like me, you may not have given much attention to the birds that are all around us, but there is beauty in watching their behavior.  How they feed, how they act among other birds, how they act among birds of their own kind, all different, all miraculous.  Some of these birds have even begun to trust me. 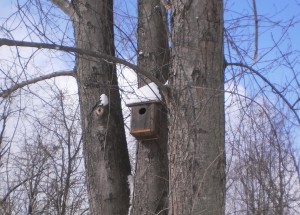 Bird house I made from reclaimed lumber.

When I go out to refill the feeder I’ll sometimes just stand still for a while.  The birds are in the surrounding trees and they will slowly begin to inch closer and closer, testing my intention.  I remain still and soon the perception of cold leaves my mind.  I remain still and birds continue to come closer.  Now they are on the feeder, so close I could almost reach out and touch them.  I am here.  With all my being I am in this moment.  My thoughts are absent, for a brief time I am entirely in this experience.  The wind gently blows the snow around me on the ground and through the leafless trees, the crystalline sound of snow flakes dancing in the wind.  The unaccustomed sound of these birds, having never been this close, is hypnotic.  For a moment, I am here.  For a moment, I am wholly alive in this raw experience, untainted by thought or perception.

I’m sorry.  These words, from which I have so carefully attempted to paint a picture for you, are a feeble attempt to translate something that transcends reason or logic.  I hope that whatever you intend to use your financial freedom for, it will bring you to the precipice of what it means to be human.  The world we live in is largely dominated by reasoning minds and although this world created by those minds is not wholly lacking, it is not wholly fulfilling either.  I’ve only begun to open the door myself and I can’t tell you if the door I’ve opened is meant to let me in or let something out…